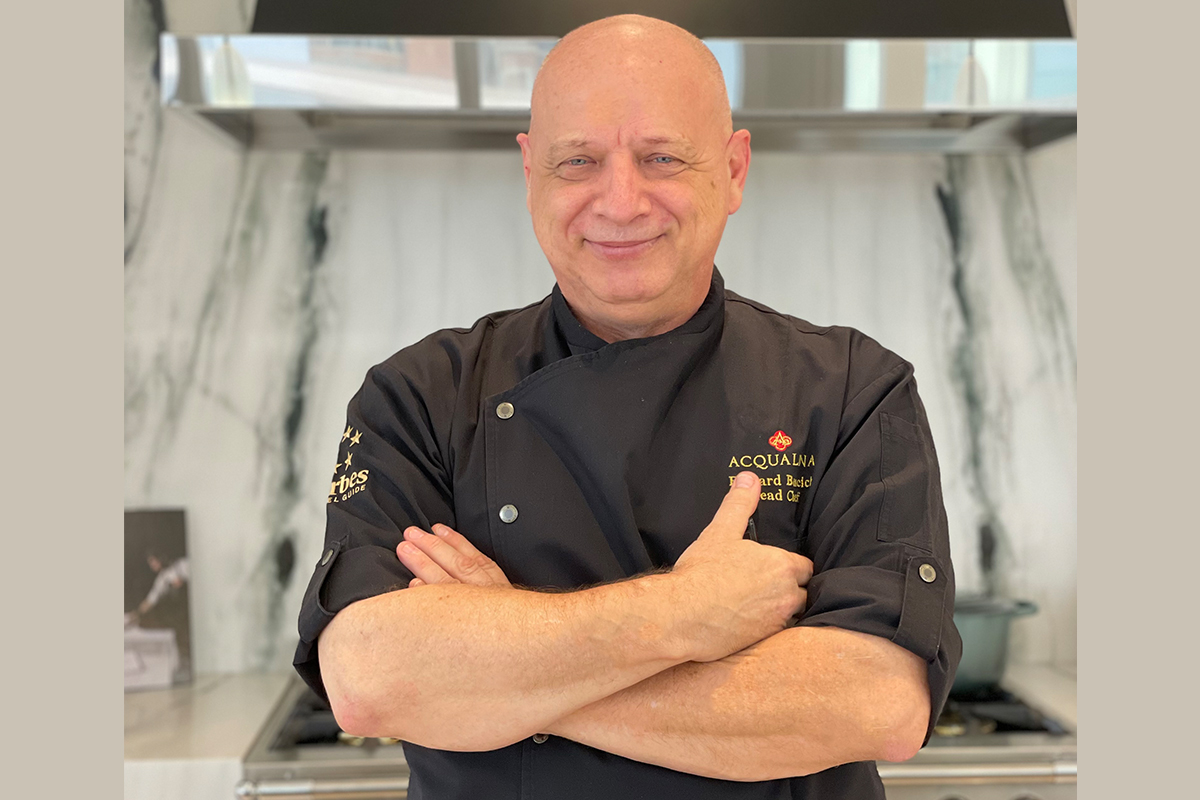 Head Chef Edward Boncich says sometimes his mother confuses family memories with scenes from the film “My Big Fat Greek Wedding.”  “It’s one in the same,” says Boncich, whose family emigrated from Croatia to New York and settled in Bayside, Queens when he was a toddler. His Thanksgiving memories are ones of 40-plus people (“those were just aunts, uncles and first cousins”) gathering for an annual American tradition with loud conversations, laughter, music, Bocce Ball in the backyard, card games in the living room, washing 40 plates between courses to accommodate all the guests, and food preparations days in advance. “We wanted to become as American as possible, so we overdid it always,” says Boncich, “there would not be just a turkey, but a ham, not just mashed potatoes, but sweet potatoes,” he says, “There would always be more.”  As a youngster, Boncich was assigned the “menial” work – chopping onions and peeling potatoes, before graduating in his teens to seasoning and finishes and brining the turkey to add flavor long before it was popular (something he is doing for this year’s Beachside Thanksgiving Dinner). To accommodate their large family, the family recruited relatives who were tradesmen, including electricians and carpenters, to custom-make tables. Then the family added a kitchen in the garage. “We’d cook in the garage,” recalls Boncich, “It’s gregarious, it’s loud, you’re talking over each other, there are three conversations going at one time, you laugh until you cry,” he recounts. “My uncle would say, ‘if you sat until you cried by yourself, they would take you out in an ambulance, but if you laugh until you cry with your family, they call that love.’” After dinner, Boncich’s mother would present limoncello, espresso, pastries and fruit.  Boncich’s father and brother would play their accordions and the entire family danced and sang until well after midnight. Boncich recollects, “There’s a saying in Croatia, ‘This is better than bread.’ My mother was tireless; she would run all day and say, ‘This is better than bread for me; it gives me so much energy.’ I associate my time in the kitchen with so many memories growing up and still carry this energy with me,” he reflects.  Experience some of Head Chef Boncich’s traditions – including his trademark turkey brining – at the bespoke Beachside Thanksgiving Dinner.