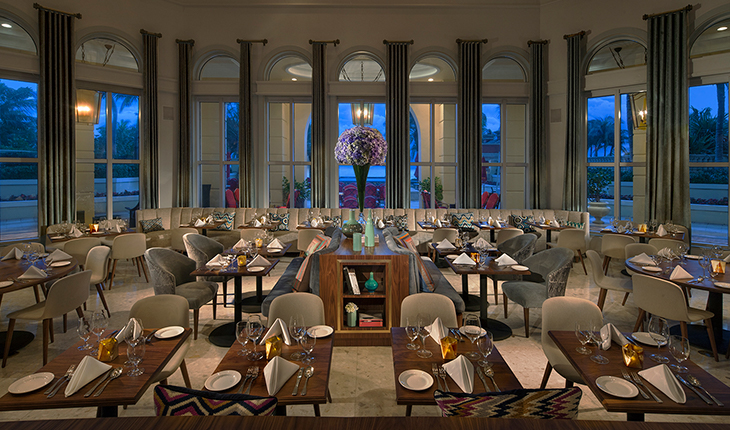 “At Chop House, I think the kids are going to be more comfortable,” says Chef Mazza. “Also, it has more light and is more open.”

Sheep’s milk ricotta, branzino crudo with blood orange and frisée, grilled octopus, and short rib ravioli are just a few of the delectable offerings on the menu crafted by Chef Mazza and his team of 10 years. “We researched the best meat, the best pasta,” he says. “We then combined a little sushi with the pasta and the meat – it’s a beautiful menu.”

From the tuna tartar with wasabi and capers to the eggplant-stuffed ricotta and mascarpone, dishes can be enjoyed alone or shared with the entire table – which is Chef Mazza’s recommendation. The sushi menu by Yakko-San is extensive, with soon-to-be favorites like the AQ Roll with spicy tuna, avocado, crunch, salmon, jalapeno, and spicy sauce.

“Every day is beautiful [in Miami],” says Chef Mazza. “Especially the hotel, right by the water.”

The location was actually part of the inspiration behind the menu, along with Chef Mazza’s desire to take a traditional British chophouse and make it more complex by incorporating creative Italian cuisine.

The produce comes directly from Miami as much as possible, and fresh rosemary and basil are incorporated into many of the dishes. “For most of our ingredients,” he says, “I’m happy with what Miami can provide.”

On the dessert menu you will find the likes of Italian ricotta and pistachio cake, as well as a selection of kosher gelatos and sorbets, while the cocktail list offers refreshing creations like La Mure with blackberries, mint, and lime juice.

Chef Mazza himself doesn’t have a favorite dish, but with a passion for fishing and market-fresh meats and produce, he does gravitate toward certain dishes. “The seafood is amazing,” he says. “The ricotta is unbelievable. It’s all good. I love the entire menu.”

(On his days off, he can actually be found cooking his latest catch for his wife or, on longer respites, scuba diving in places like the Black Sea and the waters of Cuba.)

Because Miami is world-renowned as a culinary destination, Chef Mazza knows that guests expect a flawless dining experience. “Every year [in Miami] is better and better,” he says. “I see a lot of people traveling, especially at Acqualina. They travel in Italy, they travel all over the country, the world. They know about food.”