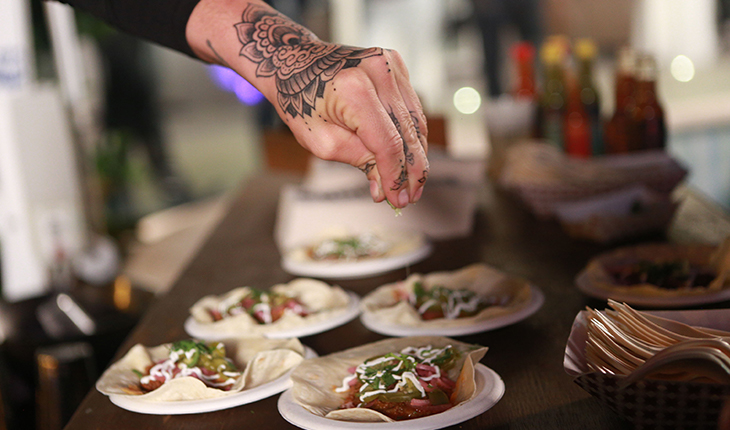 To the delight of foodies from all over the world, the Food Network & Cooking Channel South Beach Wine & Food Festival (SOBEWFF) will once again take over our South Florida shores this February. Dubbed America’s largest food festival, this five-day celebration of food, fun, celebrities, chef dinners, parties, lectures, and A-list menus is hands-down the tastiest week in Miami. And to keep returning foodies on their toes, this year’s installment—running from February 21st to 25th—has added a few new can’t-miss events to its already tantalizing schedule.

Want to see a new side of SOBEWFF this year? Book your stay on Sunny Isles Beach, soothe your senses at Acqualina Spa by ESPA, and set your sights on these five food-focused events debuting in 2018.

After studying the art of bread baking in Italy, James Beard Award-winning “Outstanding Baker” Jim Lahey moved back to New York City and opened his now-famous Sullivan Street Bakery in Soho in 1994. He opened a second outpost of his popular bakery in Chelsea in 2012 and, to this day, continues to bring his small-batch bread to New Yorkers everywhere.

While the bread got him his start, it’s certainly not the only thing Lahey is known for. Today, he oversees Co., a Chelsea-based Italian artisan and pizza shop where he whips up Roman-style pizza, rustic Italian pastries, cookies, and more. He’s especially renowned for his “no-knead bread” recipe, which inspired two books: My Bread: The Revolutionary No-Work, No-Knead Method and My Pizza: The Easy No-Knead Way to Make Spectacular Pizza at Home. During SOBEWFF, join him at the new South Florida location of Sullivan Street Bakery and find out how to make his famous, no-knead bread, hear his stories about learning his craft, and of course, indulge in all his best breads, bread dishes, and wine.

This event will take place on Saturday, February 24th from 4 p.m. to 6 p.m. Sullivan Street Bakery is located at 5550 NE 4th Avenue.

A world-renowned, three-Michelin-star chef, Jean-Georges Vongerichten is famous for his global cuisine, one that fuses his French background with his training in, and love for, the Far East. He’s written five cookbooks, one of which earned him a James Beard Award. And his restaurants—like The Inn at Pound Ridge by Jean-Georges, ABC Kitchen, ABC Cocina, Simply Chicken at Madison Square Garden, On the Rocks at Eden Rock St. Barths, and Jean-Georges Beverly Hills—are the stuff of culinary legend.

During SOBEWFF, the iconic chef will team up with Action Bronson, everyone’s favorite respected chef-turned-rapper from NYC, for late-night snacks you won’t soon forget. Set on Española Way, a pedestrian-only slice of Mediterranean paradise in Miami, guests can expect a night of sweet-and-salty midnight snacks, handcrafted cocktails, and dancing under the stars.

This event will take place on Saturday, February 24th from 11 p.m. to 1 a.m. The entrance of Española Way is located at the intersection between Washington Avenue and Española Way.

James Beard Award semifinalist Bradley Kilgore, the chef and owner of Alter and BRAVA by Brad Kilgore, has made a name for himself both here in Miami and beyond. During SOBEWFF, head to the newly-opened Phillip and Patricia Frost Museum of Science for a dinner by him, Executive Chef Mike Bagale of the Michelin-starred Alinea in Chicago, and James Beard Award finalist Justin Carlisle of Ardent in Milwaukee. Known for their skills in molecular gastronomy, these chefs will serve a sit-down dinner phenomenon that will both intrigue and delight your palate.

This event will take place on Saturday, February 24th from 7 p.m. to 10 p.m. The Phillip and Patricia Frost Museum of Science is located at 1101 Biscayne Boulevard.

If you love a good donut and live in South Florida, chances are you’ve heard of Salty Donut, one of the tastiest spots in town where all fillings, glazes, and compotes are out-of-the-box and made in-house. Its location is fitting; tucked away in artsy Wynwood, every donut is a work of art in itself. During SOBEWFF, join the Salty Donut masters themselves for an interactive class where you can learn the “Salty” secret and help make some of these small-batch, craft donuts yourself.

James Beard Award-winning cookbook author Joan Nathan has written 11 cookbooks centered around Jewish-American cooking, including her latest book, King Solomon’s Table: A Culinary Exploration of Jewish Cooking from Around the World. A bona fide expert on Jewish-American cuisine, she also hosted a PBS television series, the James Beard-nominated “Jewish Cooking in America with Joan Nathan.” During SOBEWFF, she will lead a panel discussion at The Jewish Museum of Florida with some of the most iconic names in Israeli cuisine: Chefs Alon Shaya, Michael Solomonov, Michelle Bernstein, Adeena Sussman, and baker Zak Stern. Attendees will enjoy light bites from Hank and Harry’s Delicatessen and a special look into each chef’s journey through Jewish-American cuisine.

This event will take place on Sunday, February 25th from 10 a.m. to 11:30 a.m. The Jewish Museum of Florida is located at 301 Washington Avenue.

For more information about these new events, or to buy tickets, click here.

Jennifer Agress is a freelance writer covering food, drink, and culture. When she’s not combing the streets of Miami for a bagel and a latte, she’s likely covering luxury travel and dining for Dining Out Magazine, Private Air Luxury Homes Magazine, Haute Living Miami, Upscale Living Magazine, and Epicurean Charlotte.