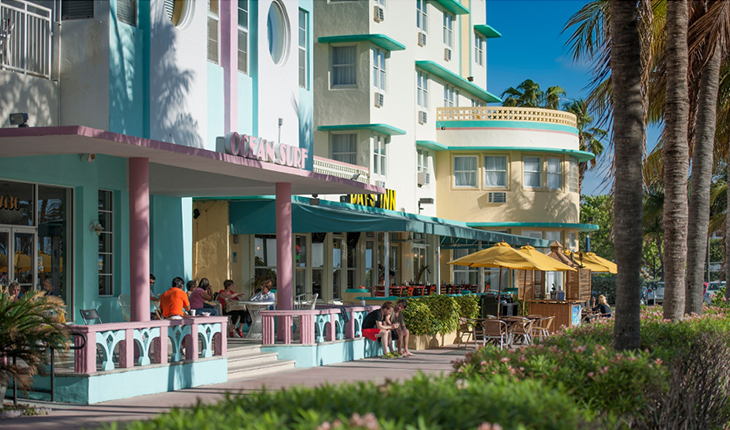 In fact, while this classic motif was first discovered in Paris during a 1925 exposition, today it’s associated with Miami Beach more than anywhere else in the world. A sea of geometric, boutique buildings in pastel hues, Art Deco is simultaneously subdued and flamboyant. Here, find every eclectic design element you can think of, all working in odd, but perfect harmony—like porthole windows, ship-like railings, sleek curves, glass blocks, shiny chrome accents, neon lights, oversized furniture, floral patterns, and much, much more. Now, picture those elements as the backdrop of bookies, early 20th-century Hollywood starlets, and Gatsby-era jetsetters alike; after all, those were the first patrons here to appreciate the Art Deco movement.

Listed on the National Register of Historic Places, today’s Art Deco Historic District is not to be missed. Want to see it for yourself? Take a stroll through Miami Beach and find the spots listed below. (Hint: They’re all as beautiful as they are iconic.)

Both the heart of South Beach and its Art Deco past, Ocean Drive is where it all began. Start at the intersection of 5th Street and Ocean Drive, and walk north; it won’t take long before you start to notice the pattern of its entirely-Art-Deco motif. When you do, look closely at each building’s intricate details: Some even have flags from popular ocean liners that anchored at the Port of Miami in the 1930s.

Ocean Drive runs right along the beach, from 1st to 15th Street.

On that walk, keep an eye out for Park Central Hotel, the “blue jewel” of Ocean Drive that will reopen in fall 2017 as Celino South Beach. Sitting between 6th and 7th Street, this was where Hollywood glitterati like Clark Gable, Carole Lombard, and Rita Hayworth used to stay when they swung through the Magic City. Originally built in 1937, Park Central was restored to its full original Art Deco splendor in 1987, making it the first hotel to do so.

90% of this “park” is actually a beach, which makes it both a local favorite and a Miami Beach must-see for tourists. Beginning at the cross-section of 7th and Ocean Drive, stand on the sand and look back towards the mainland; that’s where you’ll find that iconic view of Miami’s electrifying Art Deco skyline. Do it at night, and those same pastel buildings come alive; you’ll find live musicians, eager pedestrians, buildings glowing with neon lights, and of course, the sound of crashing waves directly behind you.

Lummus Park is a 74-acre park that runs along Ocean Drive, from 5th to 15th Street.

One of the most popular tourist areas on Miami Beach, Lincoln Road is a pedestrian-only promenade lined with restaurants, bars, and shops. Even though it sits at the edge of the Art Deco Historic District, the façade of every building still has its own period nuances. Grab a chair at one of its countless street side cafés and look around; in addition to the architecture, the people-watching is some of the best in Miami.

Lincoln Road Mall takes up the part of Lincoln Road between Washington Avenue and Alton Road.

In a sea of the Art Deco Historic District’s pastel-colored skyline, something a little different stands out: a perfectly restored, stainless-steel eatery with original neon signage that reads “DINER.”  Built in New Jersey in the early 1940s, this tasty spot was physically moved to Miami Beach in the 1990s, where it’s been an Art Deco landmark ever since.

Rising to fame as Jerry’s Famous Deli, this neighborhood deli designed by architect Henry Hohauser was originally built in 1940 as Hoffman’s Cafeteria. With its mint exterior, textured windows, and curved, delicate façade, even during its heyday, this Art Deco watering hole would have stood out from the pack.

Jennifer Agress is a freelance writer covering food, drink, and culture. When she’s not combing the streets of Miami for a bagel and a latte, she’s likely covering luxury travel and dining for Dining Out Magazine, Private Air Luxury Homes Magazine, Haute Living Miami, Upscale Living Magazine, and Epicurean Charlotte.