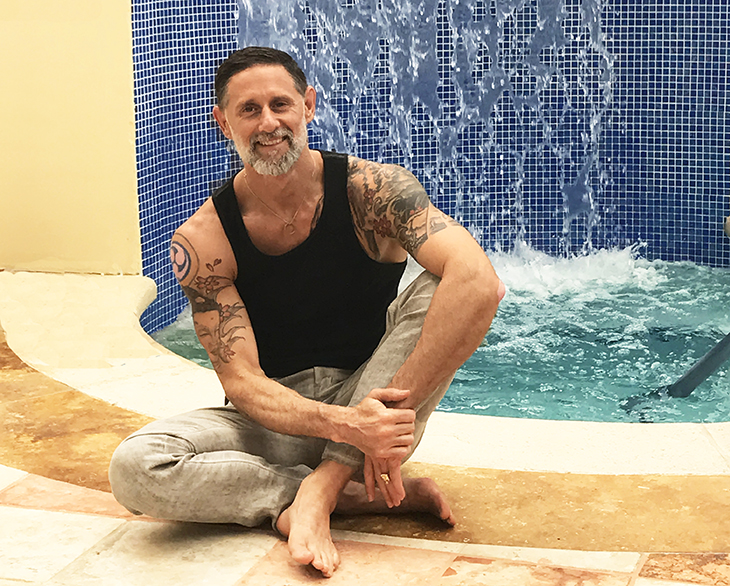 Cameron Shayne, founder of Budokon, is considered the father of the mixed movement arts culture. His technique has been dubbed the “Hot Hollywood Workout” and Cameron has used his unique fitness approach to train celebrities including Jennifer Aniston, Courtney Cox, Rene Russo, and Meg Ryan.

Acqualina was honored to have Cameron Shayne host a Budokon session at the resort this December, during Acqualina Spa by ESPA’s monthly Health and Wellness series. Guests, residents, and locals were able to experience first-hand what this social philosopher, educator, fighter, yogi, satirist, artist, writer, and founder has created to help change lives and encourage movement in an increasingly sedentary world.

We sat down with Cameron after the class for a Q&A on his influences, life motto, New Year’s Resolution and more. Read on below.

Budokon is a lifestyle wellness system that integrates yoga, martial arts, and life coaching into one comprehensive class. A typical Budokon session begins with 20 minutes of yoga sun salutations to lighten and open the body followed by a martial arts segment of explosive, dance-like movement. The end is a guided meditation.

How did you get started with movement, martial arts, fitness, and yoga?

Growing up, my family wasn’t well off so I didn’t have access to much as a kid other than the woods around our house. There were no modern electronic devices, no social media, nothing you could disappear into other than books or your imagination. We climbed trees, leaped across creeks, and swam in the lakes. I found martial arts at the age of twelve mostly because I had an angry father who was a notorious street fighter, and I found myself surrounded by rather rough men. He started slap boxing with me when I was about 8 until I started formal martial arts training at twelve. That’s when I found my first teachers, Paul and Dan Harmon. Paul was the North Carolina State Taekwondo champion and Dan trained in Korea as a world class Olympic Taekwondo competitor. I played sports at a high level throughout high school. In my early twenties I moved to LA and found Yoga thru an ex-girlfriend. In my late twenties I found Yoshukai Karate while at the same time I found my first Brazilian Jiu-Jitsu teacher Rickson Gracie. Ironically he shared a studio with my Karate teacher and my love for MMA began.

What lessons have you learned about life through your practice of mixed movement arts?

Without trying to sound like Yoda, but here goes: I find the more you move, the more you realize the potential of everything effortless is found in the struggle from nothingness. The birth of profound moments of movement begin from an idea that your body can’t quite realize. You know there’s more, but you can’t find it with your current strength, stamina, or understanding. For this reason most people resign to doing what they already can do, nothing more. They are not disciplined or determined enough to play in area of weakness, mistakes or failure. Places where immediate successes are rare if not impossible. In short, failure is the most frequent and important action that occurs in the learning process. Learn loving to fail and you’ll have massive gains.

The second most important lesson I have learned is that all movement is simple. There is no complex movement, only simple things done with such proficiency that it seems we are observing the supernatural. There are limited general variations of the human anatomy and its abilities. Therefore if any diversity occurring within movement is the result of unlimited intellectual creativity. In simple terms we are tool makers. We create objects which we build relationships with resulting in new ways we move with them, against them, or around them. Yet ultimately we are limited like any other animal by certain absolutes such a general skeletal structure, eye sight, hearing, and intelligence. Mixing movement art systems has allowed me to see how related all movement is and how easily you can adjust to any environment with solid mixed movement fundamentals.

What is your motto or philosophy for life?

You grew up in North Carolina and lived in Los Angeles for over a decade, what made you decide to settle in Miami and open a studio here?

I was in L.A for 15 years and felt it was too transient and too big. Miami feels small and connected. The yoga culture here is tiny compared to the one in L.A and NYC, which is great if you’re interested in integrating and building upon the yoga culture here. There is much more community and collaboration in Miami than anywhere else I’ve been.

Each New Year is an opportunity to take inventory of the previous year’s success and failures. Be honest with yourself and your commitments, sometimes limiting yourself and really focusing on the things that truly inspire you can be far more beneficial than adding more items on your to-do list and wasting energy. What did you miss last year that you didn’t do and why didn’t you do it? Reevaluate and reorganize your value structure then take the appropriate action in that direction. As cliché as it sounds, the best way to feel great about yourself is to do more of what makes you happy in the year ahead.