The Perfect Day in Little Havana 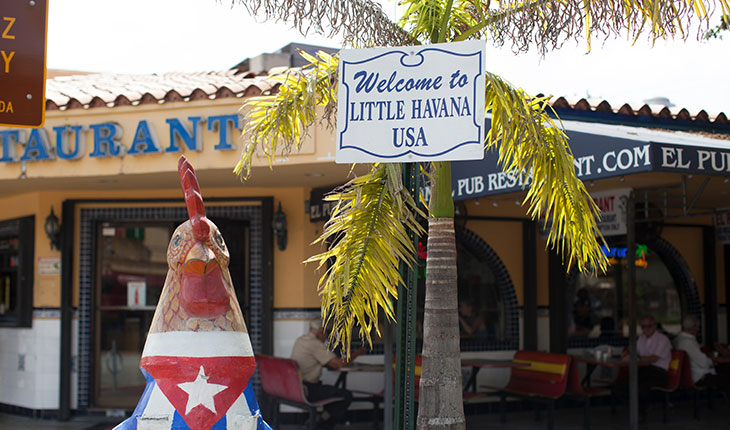 On the streets of Calle Ocho in Miami’s Little Havana, salsa tunes blare and the smells of Cuban coffee and hand-rolled cigars fill the air. Dressed in multi-pocketed guayaberas, the old guard gathers to play dominoes in the park while chatty locals debate politics over pastelitos and cortaditos in front of quick-serve, walk-up cafes. Stroll the streets of Little Havana today, and you’ll quickly discover that little has changed here since it became the world’s most populous Cuban refuge some 50 years ago. And that’s exactly why we love it.

True, getting to Cuba these days isn’t the chore it used to be, but Miami’s own slice of the tropical island should not be overlooked. It’s fabulous, fun, funky, and a completely foreign experience.

For a quick immersion in Miami’s most iconic ethnic enclave, we suggest combining four or five of our favorite experiences below, creating your own perfect day in Little Havana.

Ambush your olfactory senses at El Titan de Bronze (1071 SW 8th St.), which doubles as a cigar factory and retail store. Watch cigars being hand-rolled as the perfume of tobacco intoxicates (and then test out a stogie). Learn about the different types of cigars on offer and buy a box to share with family and friends.

Eavesdrop on Political Talk over Dominoes

Hone your Spanish at Maximo Gomez Park (corner of 15th Ave. and SW 8th St.), a.k.a. Domino Park, as guayabera-clad seniors chat about pre-Castro Cuba, the recent ease of travel restrictions to the island, and the current presidency of Donald Trump (peppered with plenty of neighborhood gossip) over languid days of competitive domino game play.

Caffeinate at a Walk-Up Window

Stand in line at la ventanita (the little window) in front of El Exquisito Restaurant (1510 SW 8th St.) and order a cortadito (a heavily sweetened, Cuban espresso shot topped with steamed milk) for 75¢. If buying for the entire family, try the larger-format colada, which comes with shot-sized plastic cups for sharing.

For those seeking an in-depth look at Little Havana’s historical and cultural roots, book a city tour with Smithsonian affiliate HistoryMiami Museum, which runs specialized historian-led excursions through Little Havana, focusing on the architecture and sights of the neighborhood plus its growing arts scene (in the last several years, over a dozen art galleries have opened plus arts incubator Futurama 1637). Since these tours are offered but a handful of times per year, a more realistic option is Viernes Culturales, a public event held the last Friday of every month between 7 and 11pm, when street vendors line Calle Ocho, galleries and stores stay open late, and street performances abound. On this night, the authority on all things Little Havana—historian Dr. Paul George—offers a free, condensed version of his cultural walking tour leaving from the Tower Theater (1508 SW 8th St.) at 7pm.

No fashion style says Cuba quite like the guayabera, the dapper four-pocketed dress shirt that’s always been en vogue for Cuban men but has become a trend (and even crossed over into women’s apparel) thanks to its newfound popularity with hipsters. The best selection and quality of off-the-rack and tailor-made guayaberas can be found at Ramón Puig Guayaberas (5840 SW 8th St.), a 5-mile Uber drive down Calle Ocho towards the neighborhood of Southwest Miami.

Have a Love Affair with Cuban Ice Cream

About the Contributor
Travel journalist Paul Rubio is a Miami native who has lived in nine countries and traveled to 110 (and counting). Rubio’s writing appears in Condé Nast Traveler, LUXURY, Robb Report, Private Clubs, and ultratravel.