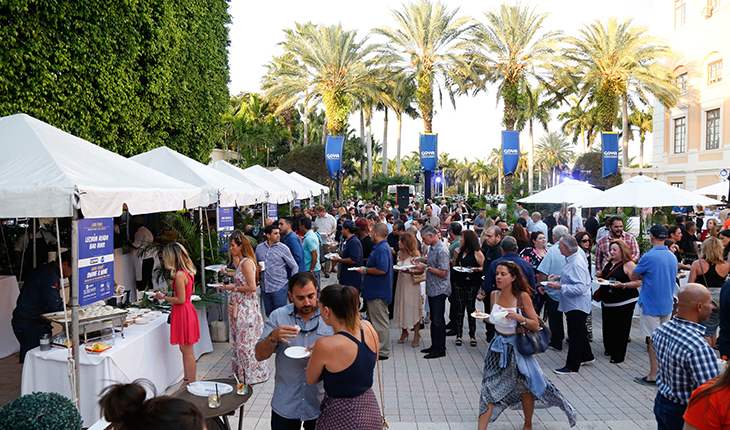 Throughout February and March, South Florida erupts with a blockbuster lineup of annual festivals and events, drawing millions to the streets, the beaches, and the clubs to celebrate lifestyles and diversity that define the Magic City. Easily accessible from your beach hideaway at Acqualina Resort & Spa, here’s our guide to the five best festivals to attend this season.

Top chefs, rising chefs, TV personalities, and more than 60,000 foodies and fans take over South Beach during The Food Network & Cooking Channel’s indulgent five-day festival in late February. By day, eat your way through more than 50 restaurants at the tented Goya Foods’ Grand Tasting Village on the beach, while sipping on fine wines and watching chefs in action on culinary demo stages. By night, choose from nearly 100 chef-hosted and winemaker-hosted dinners and seminars at famed local restaurants and hotels. Since many events sell out quickly, purchase tickets in advance to avoid disappointment.

On March 13, 1988, 119,986 partygoers made history when they formed the world’s longest recorded Conga line at this Little Havana block party, a mind-boggling street festival celebrating Hispanic culture. While that Conga-chain record has yet to be topped, nowadays the festival attracts over a million people for a wild day of live music, DJs, salsa and merengue dancing, and feasting (on ropa vieja) across the entirety of Southwest 8th Street, from 4th Avenue to 27th Avenue. Those who want more of the Carnaval-style fun can participate in a week of pre-events leading to the big day. Highlights include a Domino Tournament with the Cuban old guard in Little Havana and Carnaval on the Mile, a family-friend street fair in Downtown Coral Gables’ with live Latin Jazz, Funk, and Caribbean musicians, food stands, and arts and crafts booths.

Step aside, Wimbledon. In late March, Miami hosts a world-class tennis tourney—the largest in the world outside of the Grand Slams—on the breezy bayside courts at Crandon Park, Key Biscayne. Expect tennis royalty and their A-list followers at the two-week affair, as 96 men and 96 women compete in singles, and 32 men’s and 32 women’s teams in exhilarating doubles competition. This even is so huge, it attracts over 300,000 annually and rakes in a whopping $386 million (put in perspective, that’s more than the Super Bowl). Of course, there’s also plenty of après-tennis fun, with beachside pop-up boutiques and food trucks, public parties, and invitation-only soirees where you’ll rub elbows with your favorite tennis pros.

Celebrating its 25th year in 2018, this extended weekend of LGBTQ beach parties, pool parties, and spirited nightlife extravaganzas is the ultimate pageantry of Speedo-clad beachgoers with bulging muscles and toned bodies. More than 10,000 descend on South Beach for a series of extra-fabulous daytime and nighttime events benefitting the National Gay and Lesbian Task Force. The one not to miss: the Sunday Beach Party at Lummus Park, a daytime, DJ-led, eight-hour, all-out throw down on the beach.

In late March, South Beach returns to its party-hard 90s roots with a week that includes two of the most important events in the electronic dance music (EDM) industry: Winter Music Conference and Ultra Music Festival. The largest DJ showcase in the world, Winter Music Conference is a time when fans and partygoers can preview new tracks and remixes by their favorite DJs while industry executives sign deals with established and fresh talent to the backdrop of ground-breaking electro, drum ’n’ bass, techno, and house. Choose from several hundred high-octane parties, which take place at the lobbies and pools of Miami’s most iconic hotels, public spaces, and event arenas.

Also during this week is the annual Ultra Music Festival—a hardcore, three-day EDM party held at Bayfront Park in downtown Miami. With eight stages, including one major headlining stage (and a lineup that has previously included the likes of David Guetta, AVICII, and Skrillex), expect upwards of 70,000 attendees daily (but be forewarned that most of Ultra’s crowd skews on the younger side, as it is an 18 and older event).

Travel journalist Paul Rubio is a Miami native who has lived in nine countries and traveled to 125 (and counting). Rubio’s writing appears in Condé Nast Traveler, LUXURY, Robb Report, Private Clubs, and ultratravel.